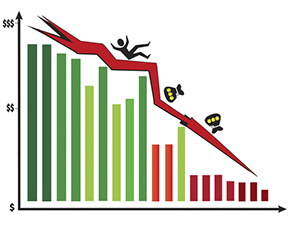 The housing market likely won’t be deeply affected by the sharp decline in stocks over the last two days because underlying economic fundamentals remain strong, says Lawrence Yun, chief economist for the National Association of REALTORS®. Jobs are being created, workers are seeing wage gains, and there’s no recession on the horizon. Those data trends don’t support the theory that the stock market drop indicates a larger underlying problem with the economy, Yun says.

Right now, the effect of the dive in stocks is mainly psychological. But if it becomes a prolonged slowdown, it could cut into the buying power of households who have exposure to stocks—and many do, primarily through 401(k) and other retirement accounts. It could also lead to job and wage cutbacks, but Yun says it’s premature to draw conclusions.

The Standard & Poor’s 500 stock index fell by more than 4 percent Monday, and the Dow Jones Industrial Average declined nearly 5 percent. As of late Tuesday, the S&P was down by almost 1.2 percent since the first of the year, although that comes after a year of double-digit gains. Yun points out that even with the drop, stocks remain well ahead of where they were a year ago. A correction is a natural part of the stock market’s cycle, Yun notes.

One metric to watch is long-term bond rates, which historically have gone up as stocks go down. That link, however, hasn’t been as strong in the past few years. Investors tend to increase demand in bonds as an alternative to stocks, driving up yields, which can lead to higher mortgage rates. Since the start of the year, the average rate on a 30-year mortgage has risen about 30 basis points, from 3.95 percent to 4.22 percent, according to Freddie Mac. That’s still low by historical standards.